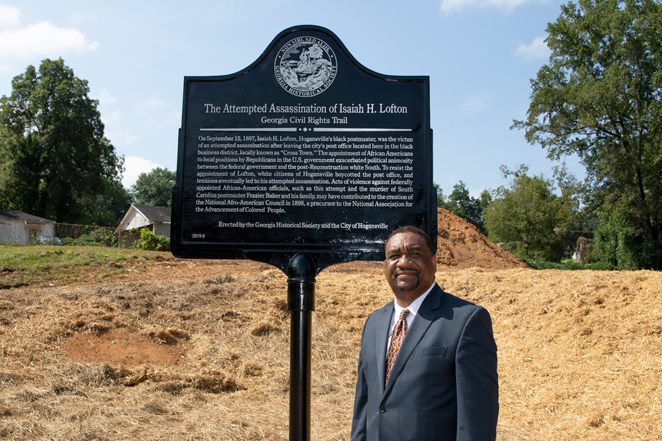 When it comes to development, most towns look to the future. A School of Social Work faculty member has gotten one Georgia town to use its past. Associate Professor Tony Lowe’s research on a nearly lost tale of early African American civil rights activism in Georgia has helped the city of Hogansville earn the inaugural Visionary Cities Award. The award recognizes successful efforts to create positive community change through effective civic engagement and collaboration. It was presented on Jan. 26 by Georgia Trend Magazine and the Georgia Municipal Association to nine cities statewide.

Hogansville won in the small city category for its collaboration with the Georgia Historical Society and members of the city and community to develop the Isaiah H. Lofton historical marker and additional assets. The marker records the attempted assassination of Postmaster Lofton, an African American, in 1897. The event started a national discussion about the rights of African Americans and played a part in the establishment of the National Afro-American Council, a precursor to the National Association for the Advancement of Colored People (NAACP). The 1897 date is the earliest on an African American civil rights marker in Georgia, said Hogansville Planning and Development Director Lynne Miller.

Lowe believes that raising awareness about Lofton’s struggle will help people better understand the role that individuals and communities have played in the nation’s civil rights history.

“The story about Postmaster Lofton is about resolve,” he told a crowd at the marker’s dedication last year. “It’s about his resiliency, it’s about his commitment, his belief in America, and about his willingness to die to exercise his rights.”

Hogansville is planning a pocket park or city trailhead around the marker, said Miller, with interpretative signage, engraved bricks, and a mural nearby. The site is now part of the Georgia Historical Society’s Civil Rights Trail.

For more information, visit the City of Hogansville website.