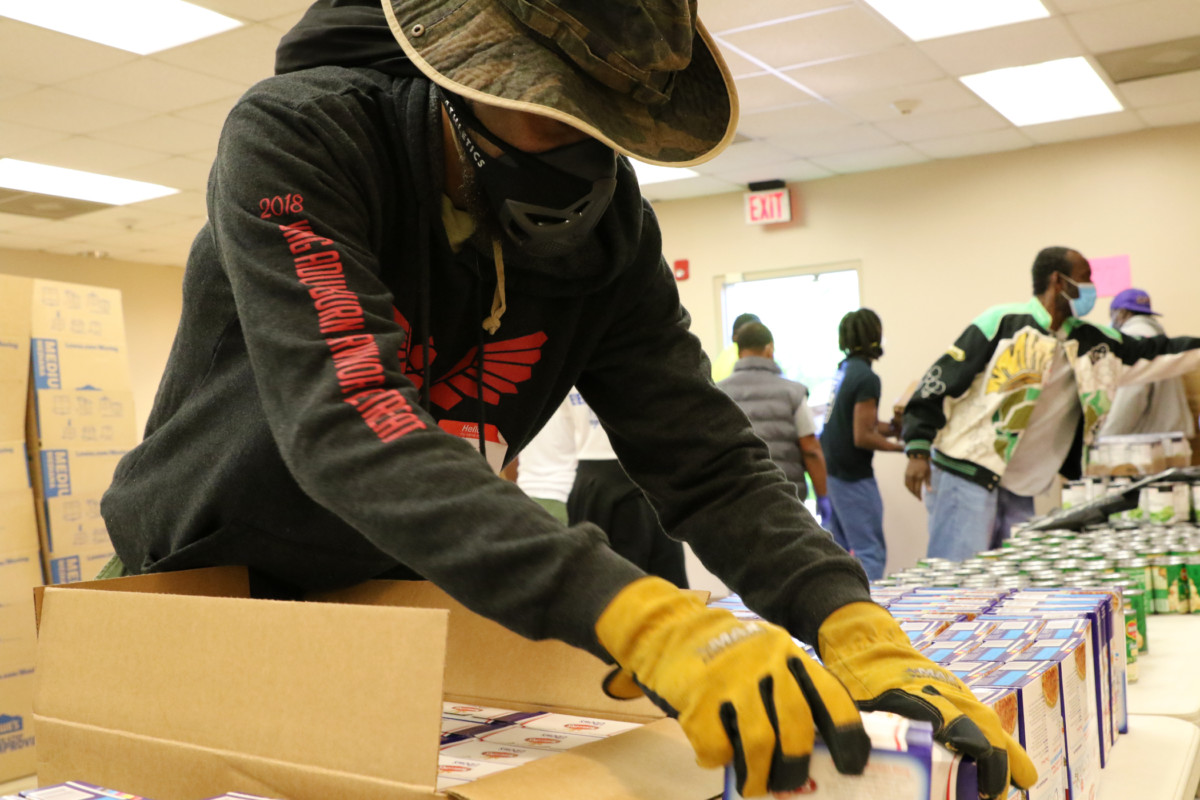 Lemuel “Life” LaRoche, an instructor at the UGA School of Social Work, assists with food distribution in East Athens. (Photo by Laurie Anderson/UGA)

On a recent morning outside the offices of the East Athens Development Corporation, a line of volunteers wearing protective face masks lifted heavy boxes of groceries from a truck to tables inside the building.

They were answering a call from the EADC, a local enterprise that supports the economic well-being of people in Athens’ most impoverished area. The nonprofit had recently increased its food distribution program from once to twice a month in response to the COVID-19 crisis.

After sorting and re-boxing the food into equal mixes of staples, the volunteers carried the goods back outside to a line of waiting cars. Each vehicle received one or two boxes, depending on need.

Lemuel “Life” LaRoche, a member of the University of Georgia’s Center for Social Justice, Human and Civil Rights and an instructor at the UGA School of Social Work, helped to mobilize the effort, which addresses food insecurity for more than 150 households in the East Athens area.

“For some it’s like, OK, we got access to food, but for other families this thing is a necessity,” said LaRoche, who also founded and directs the nonprofit organization Chess and Community, which serves at-risk youth in Athens-Clarke County.

Even in the best of times, many residents of East Athens scramble to make ends meet. Prior to the COVID-19 crisis more than half of the roughly 9,000 residents lived below the federal poverty level, said Llewellyn Cornelius, director of the center.

“Those staggering numbers will only worsen in East Athens as more people are laid off due to the pandemic,” said Cornelius, the Donald L. Hollowell Distinguished Professor of Social Justice and Civil Rights Studies at the School of Social Work.

Prior to the pandemic, faculty and students at the school assisted the EADC during a restructuring process that reinvigorated the 28-year-old nonprofit. LaRoche and Cornelius strengthened partnerships with other community organizations, made suggestions for a website relaunch, and reestablished a working relationship with the local government. Anthony Mallon, director of UGA’s Institute for Nonprofit Organizations, advised on board development and capacity-building.

Grayson Harper, a senior, immersed himself in the community’s culture during an internship and gathered data in support of a grant proposal for a job training program. Natalie Morean, a graduate assistant working toward a master’s degree in nonprofit management and leadership, used the data and input from the EADC board and community to design programs and write proposals for community block grants. The proposals were recently greenlighted by the Athens-Clarke County government.

“The EADC is now in much better standing,” said Cornelius. Projects in the works or under discussion include a job fair in East Athens and a virtual summer education program.

The school’s relationship with the EADC helped when businesses began closing due to the pandemic. After brainstorming with board members and Fred Smith, the EADC’s executive director, LaRoche helped to set up an emergency relief fund on the organization’s website and raised awareness of the fund’s existence.

LaRoche went on to connect the EADC with the Athens Chamber of Commerce and Athens Area Community Foundation. The latter brought in additional support from the Northeast Georgia Food Bank’s mobile pantry. Corporate sponsors such as Lowe’s added to the pot. Smith also reached out to Community Connection Neighborhood Leaders, which assisted with food distribution and in reaching the elderly and others who, with the closure of public libraries, lacked essential access to the internet.

“COVID-19 only exacerbated what we struggle with all the time, in dealing with people who are often living on the edge,” said Dr. Diane Dunston, chair of the EADC board. “And of course with this pandemic it has been the most vulnerable who suffer the most.”

The assistance is critical, said Dunston, not just from a physical but also a psychological standpoint.

“Number one it gives people hope. It has been very meaningful for the community to see that people care,” she said.

For LaRoche, who sees social workers’ roles as that of facilitators, hope springs from the community itself.

“We identify ways to get more resources in time of crisis, and help coordinate. What I’m loving is that there are a lot more organizations coming together,” he said.

“The people you see here are the ones making a difference.”