Teaching trauma-informed care in the courtroom 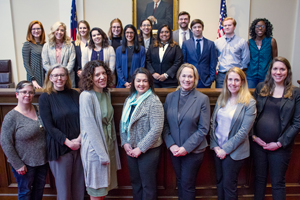 A judge will decide whether Amanda Tate and her husband, Eric Tate will lose their parental rights. Juvenile court judge Ashley Willcott will decide whether Georgia’s Division of Family and Children Services is correct to want to terminate the parents’ rights.

But this isn’t a real trial. It’s a mock trial. Alexis Trumble, who is defending the mother, is a third year law student at the University of Georgia. The other actors at the trial – witnesses, the defendants, the other attorneys – are all law and social work students.

This case involves allegations of sexual abuse and domestic violence. Eric Tate’s lawyer argues the father deserves another chance. Amanda Tate’s lawyer says the mother had done the best she can. But the lawyer for DFCS says both parents should lose their parental rights.

The trial is part of a course, a collaboration between the schools of social work and law. The goal is to teach about trauma to help future lawyers approach clients and witnesses in juvenile court and understand of how trauma works. To give their clients a sense of safety.

For the future social workers, one goal is to be less afraid when they’re issued subpoenas to testify on behalf of their clients. Playing the role of the forensic interviewer Reagan Foster is social work student Avital Abraham.

“Being in a courtroom, it can be intimidating,” Abraham says. “ So this gives us an opportunity to practice that and also to work with the law students in how to kind of make it a little less intimidating.”

This course was designed by Jennifer Elkins, an associate professor of social work, and Emma Hetherington. She’s a law school professor and directs the Wilbanks Child Endangerment and Sexual Exploitation Clinic. The two professors have won a national award for their innovative course.

Elkins says the course fills in gaps in traditional social work education. “What’s often overlooked and what we don’t get any kind of  knowledge about is interacting with the legal system amd with lawyers and with courts,” she says.

Hetherington says future lawyers need to understand how trauma works. “I need to talk to a social work professional who can fully explain trauma to a court and to me,” she says. “And for me to better understand evaluations or assessments of my clients.”

Before the mock trial itself, students spent two full weekends learning from experts about the child welfare system.

So what happened in the mock trial? In the end, Judge Willcott ruled both parents would keep their parental rights. However, because Eric Tate had been credibly accused of sexually abusing his son, she ordered the state to develop a non-reunification case plan for him. That plan would include no contact whatsoever between the father and the child unless and until a therapist recommends it and the child wants contact. She said she let Eric Tate keep his parental rights because she did not want to deprive his son of child support payments.

The judge said it was not an easy decision.

Ryan Tate and his parents, Amanda and Eric, aren’t real people. But the trauma these characters have survived is genuine. And when these future lawyers and social workers graduate they will encounter this kind of trauma in actual clients. The lessons learned in a law school classroom will make them more effective and compassionate advocates in real-world courtrooms.

“I represented a mother in a case that was almost unimaginable,” says Diana Rugh Johnson, who worked about a decade as a child welfare lawyer. She defended parents accused of abuse and neglect and at risk of losing their parental rights. Now she’s  a judge pro tem in the juvenile court of DeKalb County.

Judge Johnson was haunted by one of her cases. The case began when a pediatrician diagnosed a toddler with lead poisoning. “That one little window into that family opened up a world of trauma involving child abuse, sexual abuse, multigenerational incest,” she says. “It was probably one of the worst cases I’ve ever had.

Secondary trauma happens when people who respond to trauma – firefighters, police officers, social workers – and in this case – lawyers – are deeply affected by the trauma in the people they serve. Dr. Jennifer Elkins, an associate professor at the University of Georgia School of Social Work, explains

“Secondary trauma is often the natural side effect of having all that emotional residue glomming onto you,” Elkins says. “In some cases, secondary trauma can look like Post Traumatic Stress Disorder in more serious cases. On the other end of the spectrum, I think, are not being able to get something out of your mind..The risk of secondary trauma is it can lead to burnout and kind of not being as effective at your job.”

Traditionally, most lawyers have had no training in how to deal with the trauma experienced by clients in crisis.

Professor Emma Hetherington directs the Wilbanks Child Endangerment and Sexual Exploitation (CEASE) Clinic at the University of Georgia School of Law. That clinic represents survivors of child sexual abuse in civil litigation and in juvenile court.

“We asked a room of all the juvenile court judge in the state of Georgia how many of them had learned about trauma when they were in law school,” Hetherington says. “And not one of them raised their hands…One of my goals as a professor and as director of the CEASE clinic is to teach my students how to recognize the signs of secondary trauma and how to say ‘It’s okay to be a little vulnerable and upset’ because these topics are very upsetting.”

Elkins, the social work professor, says self-care – talking to a therapist or to trusted colleagues is key. But no one should have to go it alone when coping with secondary trauma. The solution lies at the organizational level.

“Burnout and secondary trauma happen so suddenly you don’t realize it. What we know now is that it does take more than just these individual factors,” she says. “It requires organizational support. It’s about an overall perspective  and approach to an organization that is trauma informed.”

As for Judge Johnson, in the case involving the child with lead poisoning, She found solace knowing her lawyer colleagues had spent time immersed in the same family trauma.  But being a judge has its own challenges.

“As a judge, I’m somewhat removed from the case,” she says. “Even though I experienced a certain amount of secondary trauma as an attorney, the fact that I was taking these very bad facts and doing something with them.”

But times are changing: Last year the American Bar Association published a guide to help lawyers who work with child victims and their own secondary trauma.

An audio version of this article is available at WUGA-FM.