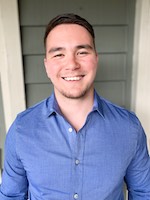 Brian Graves’ research focus is on the intersection of the criminal justice system and social work involving marginalized populations. He was born in Hawaii, but raised in Georgia. He completed his undergradate degree at the University of Georgia. Following graduation, Brian worked for a sheriff’s department in the jail division. It was there where he realized his passion for examining the growing impact of the criminal justice system and the prison industrial complex on vulnerable groups in society.

Brian obtained his MSW at the University of South Carolina. While there, Brian worked for a nonprofit that aids children and families involved in the state foster care system. As a rehabilitative behavioral health specialist, he assisted children and teens who were at risk for involvement with the criminal justice system. Concurrently, Brian worked on several social work case method teaching notes as well as a manuscript, all of which were submitted for publication. Brian joined the doctoral program in 2020. He hopes to contribute to the social work literature by exploring the criminal justice system’s intersectional impact during the current pivotal shift in societal perception and contemporary policy.